After 15 years, my return to the top of Eagle Tower 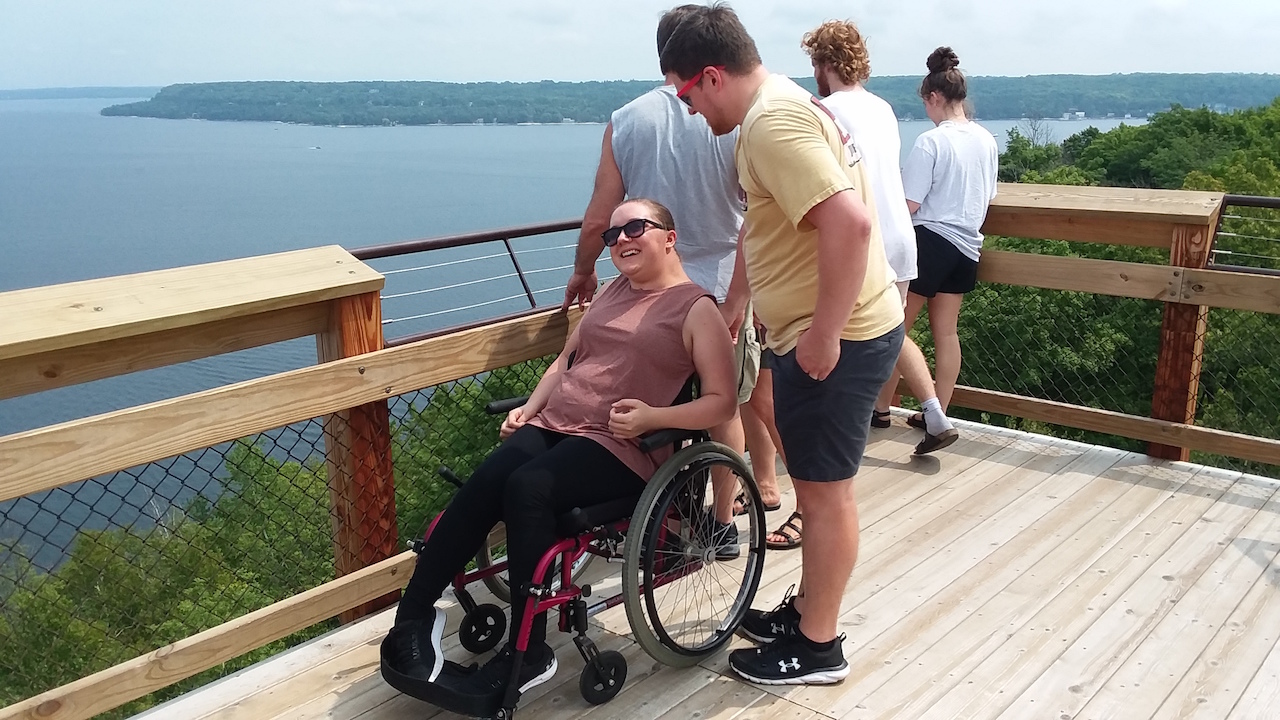 Door County Shore Reporter staff writer Carly Renguette at the top of Eagle Tower for the first time in 15 years.

Editor’s note: The author is a staff writer and social media producer for the Door County Shore Report

As a wheelchair user, here is my experience with the new tower.

I’ve been coming up to Door County every summer since I was 6 months old. It’s one of my absolute favorite places on earth and up until 15 years ago, climbing the former Eagle Tower was one of my favorite activities to do with my family each year.

But at age 11, I suffered an incomplete spinal cord stroke that left me without the full use of my body from the neck down. I thought that my years of being able to do our yearly Eagle Tower trek were over.

That was until this year.

When I arrived at Peninsula State Park in July, I was taken aback by the sheer enormity of the new structure. When I was at the park last year, construction on the new tower had just begun, so I had no idea what to expect.

Sure, I had seen videos and pictures of others heading up the ramp, but that was no comparison to actually being there in person.

My first thought as I began heading up the ramp was that I was nervous about how my body would react.

As a wheelchair user, I am much more aware of bumps in the sidewalk/road/bridge because the deviation between the two surfaces are separated by a crack. The cracks go right through the wheels of my chair and reverberate through the rest of my body causing it to tense and spasm.

I was almost dreading going up the ramp since it’s made of wooden planks. Surprisingly, that wasn’t an issue that I ran into with the ramp going up Eagle Tower. It was almost a smooth transition between the boards.

Because I had someone pushing me, I couldn’t account for how hard it would be for someone in a wheelchair to get up the ramp themselves, but my family and I were pleasantly surprised by how little of an incline there was in order to get up to the full height of the tower (60 feet).

The trip through the canopy of the trees was unlike anything I had experienced before. It was incredible to be up close and personal with nature while also being in a 100-percent accessible area.

Places like this are few and far between, and none of them have brought me to the height that the new ramp was able to.

Having been up on the previous tower when I was younger, it was nice to be able to compare not only the view of the new tower to the old one, but also the stability.

I remember being up on the highest portion of the old tower to get the best view and being able to feel it sway with the movement of too many people. Now, while the new tower is 15 feet shorter than the previous tower, it is much sturdier and still has an amazing view.

One of the things that I really appreciated about the new tower were the sections of the guard rails at the top of the tower that were made of poles and wire instead of wood like the rest of the tower. This was added so people in wheelchairs or at a shorter height than the average person climbing the tower would be able to see an unobstructed view of the surrounding area.

I also appreciated that when the people that were up on the tower at the same time as me realized that they were standing in front of those areas, they moved so that I could enjoy the view as well from my designated spots.

As I said before, the new tower is 15 feet shorter than the previous tower, but there are still 360 degrees of beautiful views to see from the top of the tower including an unobstructed view of the bay side of the peninsula. You can see Ephraim, Horseshoe and Chambers islands, and if you’re lucky like I was, you might even get to see an eagle nesting in the trees nearby.

It was amazing to be able to look over the edge of the tower and see the tops of the trees. That view helped to really ground me in the fact that I was very high up even if the trip up the ramp didn’t make me feel like it.

Another thing that was wonderful about the new tower, was the amount of space that there is at the top level. Not only were people able to spread out on the viewing platform, but as a wheelchair user, when there is enough space to comfortably maneuver and turn your chair in a full circle without having to worry about being in someone else’s way, it’s a big deal.

Finally, I was pleasantly surprised by the trip back down the ramp. Coming down was a lot like going up in that the decline wasn’t steep and the person pushing me never felt like there was a point that they were worried about guiding me. When I thought about being 60 feet in the air, I never expected that the ramp would have such a gentle incline/decline. It’s like taking a stroll through the treetops.

I would recommend anyone, with or without the need to use the ramp, to take the scenic route up the tower at least once.

Not only was the top of the tower accessible for me and others with mobility challenges, but the experience of being eye level with the forest canopy has now become accessible for everyone.

You will not regret spending a few minutes experiencing Peninsula State Park like you never have before.

I cannot thank the Friends of Peninsula State Park and all of their donors enough for giving me the chance to experience Eagle Tower again.